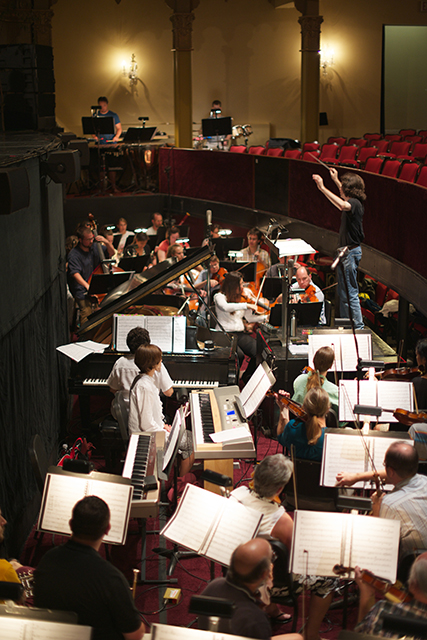 Lorne Dechtenberg is different. That’s about the only way to put it. He can’t help it – it’s in his genes. His great-great-grandfather (an accomplished singer, composer, and conductor) was hand-picked to serve as Chief Musician under Russia’s final czar. And the younger Dechtenberg is proof that, sometimes, the apple doesn’t fall far from the tree.

As a young composer, he received awards from the Florida Vocal Association, the Louisa Stude Sarofim Foundation, and the SCI/ASCAP Annual Commission contest, as well as several academic awards. Later, Dechtenberg and his Honeymoon Symphony were chronicled in the PBS documentary Composer at Work. His original works, published by Kiss on Ellipse Music (BMI), have been performed across the U.S. and Europe, and the original cast album of his oratorio King of Glory has been released globally on Amazon.com and other online outlets. While he is in demand as a performer, he continues to accept commissions, composing music for stage and screen productions, orchestras, bands, and houses of worship.

As a conductor, Dechtenberg has become known for his unparalleled energy on the podium. As Artistic Director and Principal Conductor of The Bluegrass Opera, he has led the world premieres of over a dozen new stage works and conducted excerpts from nearly twenty more. Although well-versed in the masterworks (he holds a D.M.A. and two M.M. degrees), Dechtenberg’s fearless “intent-based” approach to new and unknown works has made him a sought-after interpreter and an ideal collaborator for composers, singers, and instrumentalists alike.

But before Dechtenberg had ever studed Classical music, he was already a veteran singer-actor and songwriter, having appeared on hundreds of stages before the age of 18. He made music with such icons as the late Clarence Clemons (of the E Street Band), David Dickey (of the band America), and scores of other artists, and he was featured at events ranging from fundraising galas and festivals to Academy Awards pre-show concerts. He is currently Musician-in-Residence at Temple Adath Israel in Lexington, and his original Jewish music, besides being used there, has also been picked up by other congregations around the country. As we said, Dechtenberg is different. But his versatility is equaled only by his passion for using his art to have a positive impact on others, and so we’re thrilled to represent him. For information about bookings or commissions, please contact us at info@upbeatarts.com.